Back to all press releases

Berlin, 27th of April 2016 –
Cartamundi, imec and Holst Centre (set up by imec and TNO) are proud to announce to have just won the “Best Product” - Award at Printed Electronics Europe for their ultra-thin plastic RFID technology integrated into Cartamundi’s playing cards. The jury has hereby recognized the potential of this technology to become a gamechanger for the gaming industry, as well as for many other printed electronics applications in the Internet-of-Things domain.

With economic and form-factor advantages compared to traditional silicon-based technologies, Holst Centre’s and imec’s ultra-thin plastic RFID solution is essential to improve and broaden the applicability of electronics seamlessly integrated in paper. This enables Cartamundi to develop connected devices with additional value and content for consumers. At the conference, Cartamundi, imec and Holst Centre demonstrate an industry-first prototype of the ultra-thin flexible RFID chip integrated into a playing card. In each card, the RFID chip has a unique code that communicates wirelessly to an RFID reader, giving the cards in the game a unique digital identity.

Chris Van Doorslaer (CEO) is delighted with the award and sounds ambitious:

“Cartamundi’s ambition to embed wireless RFID tags in games and trading cards products is a ‘game changer’ indeed. The new technology will connect traditional game play with electronic devices like smartphones and tablets. As Cartamundi is committed to creating products that connect families and friends of every generation to enhance the valuable quality time they share during the day, this technology is a real enabler.”

“This is a thrilling development to demonstrate our TOLAE electronic technology integrated in the product of a partner company. TOLAE stands for Thin, Oxide and Large-Area Electronics”, stated Paul Heremans, department director of thin-film electronics at imec and technology director at the Holst Centre. “Our prototype thin-film RFID is thinner than paper—so thin that it can be invisibly embedded in paper products, such as playing cards. This key enabling technology will bring the cards and traditional games of our customer in direct connection with the Cloud. This achievement also opens up new applications in the IoT domain that we are exploring, to bring more data and possibilities to applications such as smart packaging, security paper, and maybe even banknotes.”

Steven Nietvelt Chief Technology & Innovation Officer: ” This is Cartamundi at its very best: bringing new solutions to the ever creative game developing community. We are convinced the gaming community will be inspired by this technology. It can possibly enhance existing games but also allows for brand new concepts to arise.”

Imec and Cartamundi engineers will now explore up-scaling of the technology using a foundry production model.

This award would not have been possible without the support and advise of VLAIO. VLAIO played a substantial role by bringing all partners of the project together.

Imec performs world-leading research in nanoelectronics and photovoltaics. Imec leverages its scientific knowledge with the innovative power of its global partnerships in ICT, healthcare and energy. Imec delivers industry-relevant technology solutions. In a unique high-tech environment, its international top talent is committed to providing the building blocks for a better life in a sustainable society. Imec is headquartered in Leuven, Belgium, and has offices in Belgium, the Netherlands, Taiwan, USA, China, India and Japan. Its staff of more than 2,400 people includes about 740 industrial residents and guest researchers. In 2015, imec’s revenue (P&L) totaled 415 million euro. Further information on imec can be found at www.imec.be. Stay up to date about what’s happening at imec with the monthly imec magazine, available for tablets and smartphones (as an app for iOS and Android), or via the website www.imec.be.

The production and sale of cards has been Cartamundi’s core business since 1765. In the past decade the company became the world’s leading manufacturer of playing cards, card games and collectible cards. The year 2015 was a groundbreaking year, as Cartamundi completed the largest acquisition in its history. By taking over two state-of-the- art facilities from Hasbro — known for producing legendary board games such as Monopoly, Trivial Pursuit and Risk

Cartamundi became the world’s leading game manufacturer. The Cartamundi group now has a workforce of 2,060 with factories in Belgium, Germany, France, UK, Ireland, Poland, USA, Brazil, Mexico, India and Japan, and 14 sales offices worldwide. In 2008, the company was awarded the accolade of Entrepreneur of the Year. This year Cartamundi received the Company of the Year Award from the Belgian-American Chamber of Commerce. The purpose of Cartamundi is “sharing the magic of playing together”.

Holst Centre is an independent R&D center that develops technologies for wireless autonomous sensor technologies and for flexible electronics, in an open innovation setting and in dedicated research trajectories. A key feature of Holst Centre is its partnership model with industry and academia based around shared roadmaps and programs. It is this kind of cross-fertilization that enables Holst Centre to tune its scientific strategy to industrial needs.

Holst Centre was set up in 2005 by imec (Flanders, Belgium) and TNO (The Netherlands) and is supported by local, regional and national governments. It is named after Gilles Holst, a Dutch pioneer in Research and Development and first director of Philips Research.
Located on High Tech Campus Eindhoven, Holst Centre benefits from, and contributes to, the state-of-the-art on-site facilities. Holst Centre has over 200 employees from some 28 nations and a commitment from over 40 industrial partners. 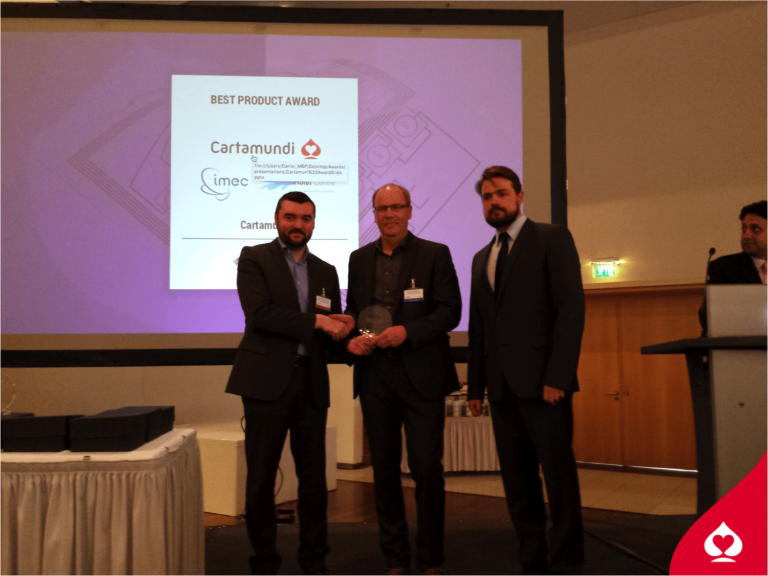 Get in touch with the Cartamundi media relations team