Turning a loyalty campaign into a long-lasting promotion.

Companies that operate in competitive market segments rely on developing unique selling points with which they can distinguish themselves from their competitors. One way is to use innovative promotions based on collectible playing cards aimed at gaining customer loyalty.

In the campaign “Through the oceans in 8 weeks”, implemented by Spielkartenfabrik Altenburg GmbH, Netto Nord, together with its mascot Scottie, took its customers into the underwater world in summer 2014. The promotion was based around 108 collector cards and a 26-page collector’s album with pictures and information on marine creatures and the eight marine regions of the world, including trump values for games. An app allowed collectors to access an “online aquarium”, to which the cards could be added and viewed using augmented reality technology.
In December 2014 the five-person jury of the Promotional Gift Award, consisting of experts and managers from business and media sectors, decided, for the 13th time, the winners of the prestigious Design and Communication prize for Promotional Products. ASS Altenburger won the Best Practice “Oscar” for the advertising industry. “An unparalleled, well thought-out promotion that conveyed a huge amount of knowledge and information” was the jury’s verdict.

The enormous success of the first campaign enabled Spielkartenfabrik Altenburg GmbH to persuade its customer NETTO Nord to send its mascot on his travels again in 2015. Scottie had already sailed across the sea and dived down to the depths of the oceans. In doing so he had met the most amazing animals and conquered the highest waves on his cool surfboard. He had even found a special friend on his travels: the beautiful mermaid. In the follow-up campaign “Oceans 2 – We surface!” a new, big adventure was in store for Scottie! Together with the customers of NETTO Nord, he came up from the oceans and went on an exciting voyage of discovery through the world of islands and coasts. Again there were 108 extraordinary animals that live on the shore, near the water or in the treetops to discover and collect. With the colourful collector’s album and the collector’s box, ASS Altenburger had once again put together an impressive and informative concept. 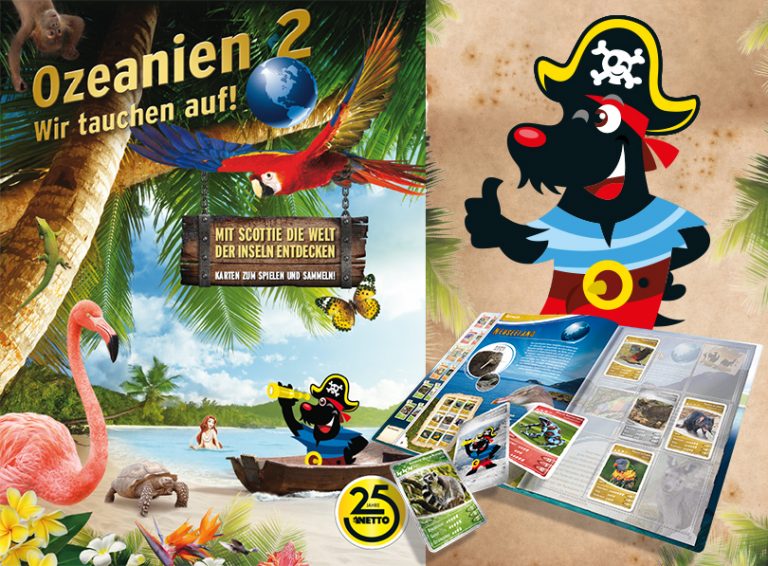 The third campaign in a row makes “Oceans” a series, which is unique to date on the German market. The successful collaboration between NETTO Nord and ASS Altenburger continued in 2016 and doesn’t look set to end any time soon…
In that year there was even MORE to discover with Scottie – amazing, exotic animals on collector’s cards, hazardous jungles as well as exciting puzzles to have a go at! Scottie is out and about again and wandering through the jungles and rainforests of foreign islands and countries. There is a special feature this year – in addition to the interesting texts and information about countries, continents and animals, there are optional puzzles and little tasks to solve. These are intended to encourage children to think and join in. The consistently high sales figures for this third successive campaign make the “Oceans” series a huge success! 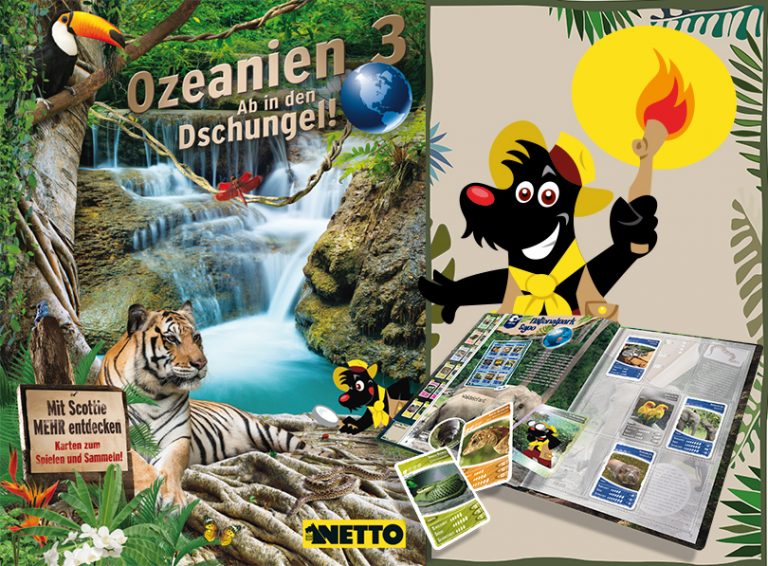 Scottie goes on safari! The fourth edition of the collector’s cards promotion “Oceans 4 – Now it gets wild!”, designed and implemented by ASS Altenburger, is centred around exotic inhabitants of the wilderness such as cheetahs, rhinos and zebras! The promotion is being launched by the regional discount supermarket NETTO, a subsidiary of the Danish group Dans Supermarked, on 24 July 2017. This year the NETTO mascot Scottie invites customers to go on safari, where there are lots of animals to discover from the remote wilderness, again on 108 collector’s cards. This year for the first time the Oceans 4 campaign has its own website. At www.netto-ozeanien4.de, three further exciting Oceans games supplement the playable collector’s cards: The MEMO game involves finding matching pairs of animals and at the same time bagging money-off vouchers – each week the four players with the highest score win a NETTO money-off voucher worth EUR 15. In addition, players can score in the quiz using their wildlife knowledge and they’ll need eyes like a hawk for the spot the difference game! Anyone who wants to enhance their smartphone or computer desktop with the Oceans animal motifs can find a multitude of great animal wallpapers at www.netto-ozeanien4.de which can be downloaded free of charge. 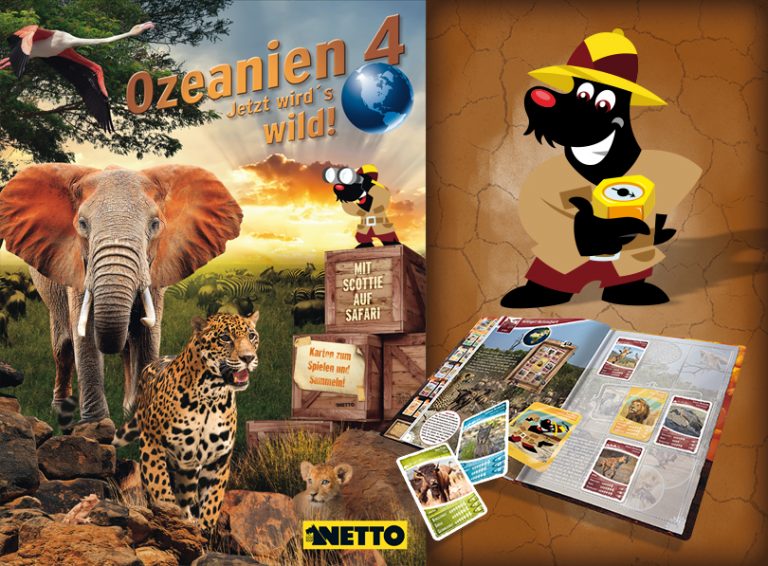 Also this year, Oceans collectors can learn more about the inhabitants of the wilderness in a fun way from the key facts about the respective animal given on the card. The collectors can also play Trumps and Families with the cards. What’s more, anyone who wants to boost their playing and collecting experience can combine the OCEAN 4 cards with those from the three previous editions.

Are you a retailer or supermarket and also looking for a card campaign to increase your loyalty? Get in touch!