Cartamundi - Benefits of Play: Well-being in a hectic world

Benefits of Play: Well-being in a hectic world

Today’s hectic lifestyle leaves little room to relax. Games distract your mind from daily obligations and allow your brain the rest it so desperately needs. 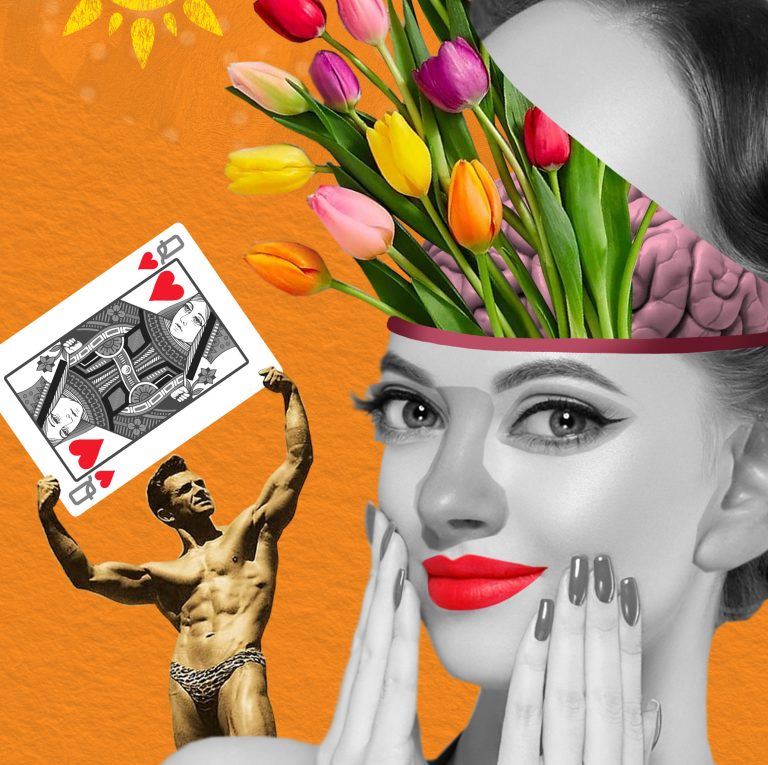 Playing together is … caring about your mental health

Mobile phones, work, care for children or parents, worries about money or health … they all put us in a state of heightened alertness. Luckily, there’s always playing cards and board games to take our minds off our troubles. Playing games can be an antidote to the many things that scream for our attention and a piece of the puzzle to improve our mental health. “It helps me ground myself”, says Rob Sparks.

For Rob, an independent UK board game designer at Board Game Bud, the struggle with mental health is real: “I have no problem talking about my daily struggle with anxiety. On the contrary, I don’t shut up about it. It’s a big part of my life, full of victories and defeats.” Quite like a game.

He overcame severe bouts of burn-out and learned to recognize the warning signs: “I find simply being aware of poor mental health, and talking about it, and then taking steps to bring myself back into the present really helpful. That’s where board games are fantastic company. Because you really are in the moment, very mindful, very present. When I play or design games, I’m in a small world of my own.”

Hardwired to have fun?

A simple look at our newspapers and the TV news proves that as humans we’re hardwired for negativity, which can easily weigh one down. Games can be effective in stopping negative or depressing thoughts.

Looking for answers, we need to go back to when man first picked up a stone to use it as a tool. According to Psychology Today, “From the dawn of human history, our very survival depended on our skill at dodging danger. The brain developed systems that would make it unavoidable for us not to notice danger and thus, hopefully, respond to it.”

One day at the spa won’t make much of a difference. It takes frequent small positive experiences to tip the scales toward happiness. A game a day keeps negative thoughts away.

From slumped to pumped

How can games turn a bad day into a great one? Deej Johnson – a magician, word wizard at Mojo Nation, writer, creativity expert and one-time hypnotherapist – offers some insights:

“As a species we require a certain number of basic psychological needs to be met, to keep us content and happy. And we are equipped with resources within ourselves to meet those needs. It is fair to say that if you and I play a lot of games and we were meeting up regularly, whether we knew it or not, we would be meeting certain unconscious needs. 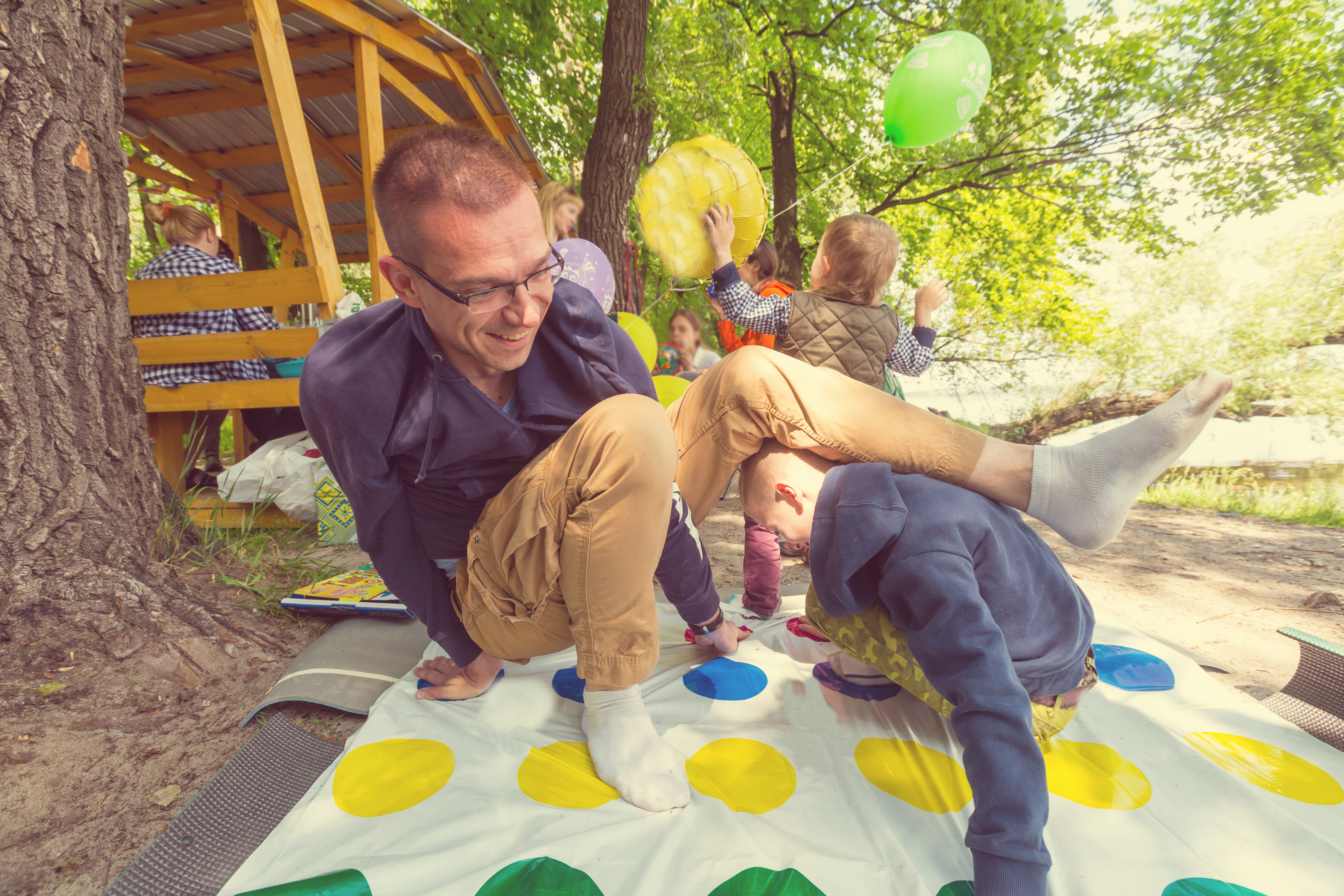 According to Deej, who follows an approach to psychology known as Human Givens, games provide nothing inherently in terms of mental health. “If you’re bobbing along socially and the dynamic requires no board game to become the catalyst for fun, then it won’t necessarily add anything to your psychological wellbeing. It depends on what needs–such as being given attention by others and connection to a community–are being unmet elsewhere.”

Still, even if all your needs are well covered, Deej points out, games and brain stimulation can take you “from slumped to pumped” in a few minutes.

To some, play does not seem like a productive way to spend valuable time as an adult. A thought that makes Rob Sparks and Deej Johnson shudder.

“Some people easily dismiss games as being childish. But put the right game in front of them, and it can be a gateway,” says Rob. “Be sure to pick an accessible game. I made the mistake of introducing some of my friends who are not really into board games to Viticulture [where players play the roles of wine farmers in pre-Modern Tuscany, ed.] and regretting it immediately.” (laughs)

“Laughter is tremendously stimulating for your brain”

Rob managed to convince people, up to the point where they admit: “Hey, hold on, this is actually lots of fun.” For some people, the game itself is secondary. Rob says: “I have a friend who always comes to our poker nights. Even though he’s terrible at poker. But he doesn’t care that he loses money. For him, it’s just the price of admission to ‘hang out with you guys.’”

Other people are in it for the competitiveness of the game and feel better because they can vent some frustration. Or they deliberately want to give their eyes a break from the digital world. Work and other commitments fall away while we play and enjoy some real-life interaction, fun and laughter, which has not been labelled ‘the best medicine’ for nothing.

“Laughter is tremendously stimulating for your brain”, says Deej. “Even more so than relaxation. If you pick the right games, you’ll laugh a lot.”

Dr Stuart Brown, a pioneer in research on play, found that when people play, their brain fires impulses into the frontal lobe, where many of our executive functions are regulated. That’s why playing is also associated with improved memory. “The opposite of play isn’t work”, Dr Brown once said. “It’s depression.” He encourages people to infuse every minute of their lives with all kinds of play, promising them a better and more empowered life.

In his TED Talk, Dr Brown says: “Play has a biological place, just like sleep and dreams do. […] [To play is] the next step of evolution in mammals and creatures with divinely superfluous neurons.” Indeed, animals play too and species that would normally eat each other have the capacity to bond over play. “The fact that the polar bear and husky or magpie and a bear or you and I and our dogs can cross over and have that experience sets play aside as something separate.” 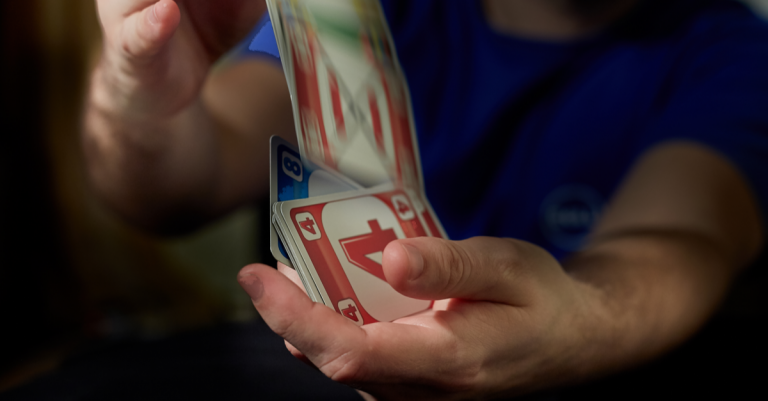 “Everything that entertains and distracts you and grounds you, especially when you’re dealing with stress through the day, is a worthwhile use of time.”

While we play, there’s a hormonal effect taking place. Playing games raises the levels of endorphins in our body. Those are the same chemicals that give you a warm, happy feeling when enjoying a nice dinner or the afterglow of a work-out. During a game and while bonding with the people at the table, your brain is also releasing oxytocin, a hormone that is involved in feelings of love and connection.

And let’s not forget the feelgood chemical dopamine. “Every time you’ve achieved something throughout the game–scored a point, overcome a challenge, thwarted an opponent–, the brain releases dopamine”, Deej explains. “And if you win, particularly if it’s a surprise to you, that’s when the big hit of dopamine comes in. At that point, the parts of the brain that are responsible for pleasure light up like a Christmas tree.”

What about stress? As you play, you’ll also experience uncomfortable tension. Yes, there may be plenty of positive excitement. But the negative stresses of fight-or-flight fall away as you focus entirely on the fun and safety of a card and board game with friends or family. This is a useful coping mechanism that can help protect you from burn-out.

For Rob Sparks, who faced burn-out more than once, that focus is essential. Especially the focus on the physical objects that come with the board game. “That physicality is the more interesting side of where the mental health kicks in. The idea of when you’re playing, you’re doing a lot of stuff with your hands, like shuffling cards. It might seem quite minor, but there’s something I find very pleasing about being hands-on and playing around with little objects and focusing my attention on something small.

“Your mental challenges are unique to you, and regardless of how small they may seem compared to others, they are very valid”

“I find it quite calming when mentally I’m in a bit of stormy time. It’s all about mindfulness really. Everything that entertains and distracts you and grounds you, especially when you’re dealing with stress through the day, is a worthwhile use of time. When we’re playing Dungeons and Dragons, I want to roll some real dice, not use some online tool.”

Games make you feel good about yourself

To conclude, games have the restorative power of happy distraction and positive thoughts. They keep daily troubles at bay while you have fun with friends and family. And they create good memories to sustain you long after you’ve finished playing.

Rob Sparks even finds huge satisfaction in playing solo board games: “I play these exactly like I want to play. I can leave the game on the table and take a turn every day.” So, as far as mental health goes, it doesn’t always take two to tango, although Rob is ready to admit he missed social interactions during the recent corona lockdown too.

Playing card and board games provide a good way to train problem-solving abilities and step outside of your usual boundaries. A shy person can step up to the forefront while playing. Games provide a sense of being part of something, a sense of worth, strengthening our self-confidence.

There’s also no doubt a game night can be the start of acknowledging mental issues and discussing them with others: “Your mental challenges are unique to you, and regardless of how small they may seem compared to others, they are very valid”, Rob concludes. “If you talk about them, you may realize how not alone you really are.”